Gazpacho is the original chilled soup, dating back to the 800s!

Most people probably don’t know the origin of gazpacho and probably don’t care as long as it tastes good, but at De Las Mías we do care because it makes us proud of our rich and diverse heritage. 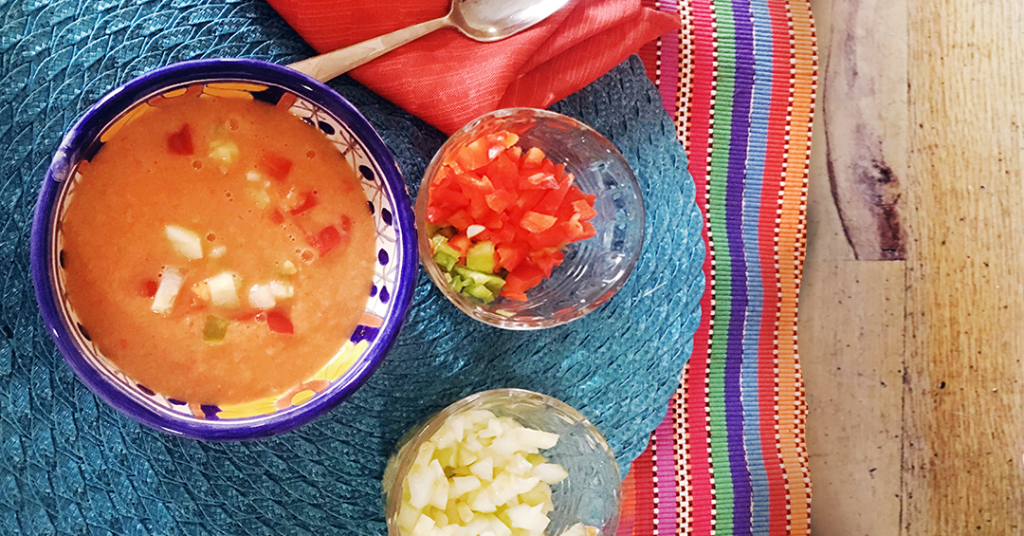 Gazpacho has ancient origins dating back to the Moorish occupation of Spain starting in the 800s and ending in the mid 1400s. It started off as a simple soup made of ground garlic, stale bread, olive oil and water and evolved into the most famous version which is the gazpacho clásico we are all most familiar with.  This one has all the classic ingredients, including tomatoes from the Andes! What a rich history we Latinas have–going all the way back to the Moors, to Latin America and back again!

Gazpacho is still a staple in Southern Spain, but you can find it in almost any tapas bar in Spain in the summertime. I had my first bowl in Madrid in August when I was young and poor, and boy was I glad it was cheap and chilled. (Aficionados say it should be cold and not chilled, but mine gave me brain freeze and I loved it!) Have it your own way, Comadres! No matter how you slice it, or blend it, gazpacho is delicious, refreshing and nutritious!

This fantastic concoction has a rich history dating back to the Romans. Like many other Spanish, Latin American and Mexican American foods, gazpacho has evolved and continues to evolve here in the U.S.

There are many different kinds of gazpacho:  green, melon, and my personal favorite, watermelon gazpacho. With so much variety there’s so much to choose from! We love this article on 11 variations of gazpacho.

De Las Mías Test Kitchen Chef, Lori, and our fabulous nutritionist, Malena Perdomo, put together this traditional recipe especially for you! It’s easy and quick and makes about 4 cups. (You can find it in De Las Mías app in La Cocina!)

So, don’t be shy, Comadres! Dive into the deliciousness of gazpacho. A great way to love your veggies and your body.